A fashionable guide to Seoul by theStylistme

In the occasion of #Seoulfashionweek,I’m happy to tell you about my country, South Korea and my home town, Soul, its capital. From a fashion view point its very interesting and creative as you can see the western trends interpreted according to the eastern culture. Korea is situated between Japan and China. From a cultural standpoint and linguistically, Korea is much closer to Japan. Being in between of the two, Korea is pretty much forward looking from both a technological angle and fashion. So much so that many Japanese and Chinese come to Korea to shop. I was born in Seoul, the capital of South Korea. The city’s situated in the northwest of the country, just south of the demilitarized border. The city as the political social and economic centre of the state, and it’s the base of many multinationals’ headquarters which operate in the country. As the capital of Korea, Seoul represents one of the strongest economic powers on the world stage and it’s the concrete symbol of what is called “the Miracle of the Han river”, which refers to the huge progress the Korean economy has undertaken in the last decades. 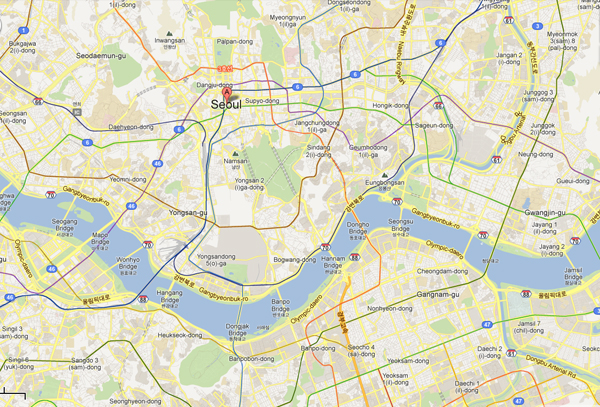 Mountains circle Seoul on all sides with Namsan (South Mountain) springing up in the centre. Although the Han River once marked the southern boundary, the city has sprawled across to the southern side with some two-dozen bridges crossing it and one subway tunnel underneath. As Korea’s capital and most populous city, Seoul represents the country’s centre for business, education, and modern culture. It offers many activities for everyone, including museums and palaces, parks and mountains, and amusement parks and nightclubs.

Let me begin my guide to Seoul with the old city, north of the river Han, which is a must see.

Insadong is the largest market in Korea. The main street is connected to a multitude of alleys that lead deeper into the district. At one time it was the largest market for antiques and artworks in Korea. Its lovely as you can see ancient architecture, like pagoda roofs. There are lots of antique markets on the little roads which go deeper in the Jongno-gu district. Samcheong-dong is in the same district and it maintains the ancient structures. Samcheong-dong is also a neighbourhood of Jongno-gu district of Seoul. It lies north of Jongno and east of Gyeongbokgung. This hilly neighbourhood is characterized by numerous small art galleries, shops, and restaurants.

Gyeongbokgung is an ancient royal residence now turned into museum. It was built for the first time in 1394, and then rebuilt in 1867. It was the largest and main structure of the Five Great Palaces which were built during the Joseon dynasty. The name of the palace is translated as “the Palace of Shining Happiness”. It’s situated in the northern part of the metropolis. Biwon (or Secret Garden) is Changdeok Palace’s garden, another of the Five Great Palaces and a UNESCO world Heritage Site since 1997. It’s formed by many pavilions, ponds, trees, rocks in strange shapes. Visiting the park offers a chance to witness the traditional Korean way of living in harmony with nature.

Myeong-dong is mostly a commercial area, being one of Seoul’s main shopping and tourism districts. It features mid-to-high priced retail stores and international brand outlets, and it is a particularly popular area for young people and tourists as a centre for fashion and sightseeing. Several large shopping centres and department stores are in the district including Lotte Dept Store, Shinsegae Main Dept Store, Miliore, M Plaza and Noon Square. Myeongdong has been hosting a festival since 1982 to vitalize the commercial area and encourage tourism. The festival is usually held twice a year: from the end of March to the middle of April in spring, and the month of September in autumn. Parades, music and dance performances, fashion shows and other spectacles are part of the festivities. And now lets move onto the southern part of the city, which is called Kangnam. It was built at a later date, so the atmosphere is much more modern, full of skyscrapers and that is where I was born and raised. It’s almost like being on Madison avenue in New York or Via Monte Napoleone in Milan. I advise you to go to these tree districts.

Cheongdam-Dong, Also known as “Fashion and Art Street”. You can consuder it the Via Monte Napoleone of Seoul. The main luxury shops from international designers, including Dolce&Gabbana are situated along this artery. This is the starting point for any shopping trip in Seoul. Multi brand concept stores like Corso Como 10 and Boon the shop are also based along this street. Apgujeong-Dong its known as “Yuppie Street” as many young Korean people who studied abroad and who now occupy important positions in society, and many fashionable young people like to peruse the shops of Korean designers, bars and restaurants.

Garosugil is similar to Soho, New York. Its only recently become a cool area to hang out in and there are a lot of cosy restaurants and cafés in Garosugil that serve fusion style Korean desserts. Many boutique stores can be seen on the street, as well as pop-up stores and due to its reputation as a ‘trendy hot place’, many of the promotional events are being held there. In the Eighties, Gallery Hey, the first art gallery which moved to the Gangnamgu district brought with it many other cultural association which have benefitted Koreans. Garosugil is 670 metres long and its believed to be the most important road in Gangnam.

Seoul is a very modern metropolis but if you want to see more ancient Korean architecture venture outside the city.

Gyeongju is situated at the very south of Korea and was the capital of the Shilla Kingdom for over 1,000 years. Thousands of historic buildings and objects have been maintained well throughout the city, truly making it the “museum without walls.” Many sites are within easy walking distance from each other, making visiting the city very convenient. The Eastern Historic Zone contains someof the city’s most famous sites. Gyeongju is often referred to as an open-air museum. Bulguksa Temple, Seokguram Grotto, Yangdong Folk Village, Mount Nam (Namsan), and several other major areas of Gyeongju are registered as UNESCO World Heritage Sites, and there are around 1,500 national treasures, treasures, historical sites, and cultural assets scattered throughout the city.

Gyeongju can be a very expensive place for visitors! Although many of the historic sites can be viewed for free, the most popular ones have steep admission prices. If you are a Kyongju resident, however, you can get into most places for free. As you can see, South Korea is a peninsula like Italy and geographically spiking its situated at the same latitude as Italy. There are 4 distinct seasons and the weather is similar to what we have here in continental Europe. Best times to visit are of course Spring and Autumn. 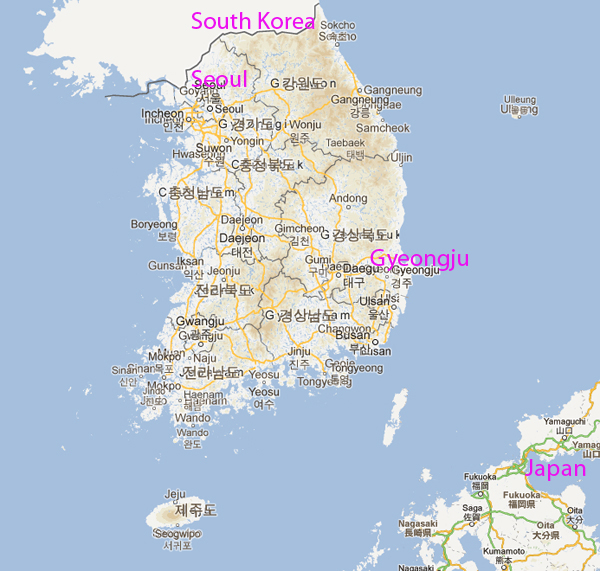 You will be welcomed in Korea!