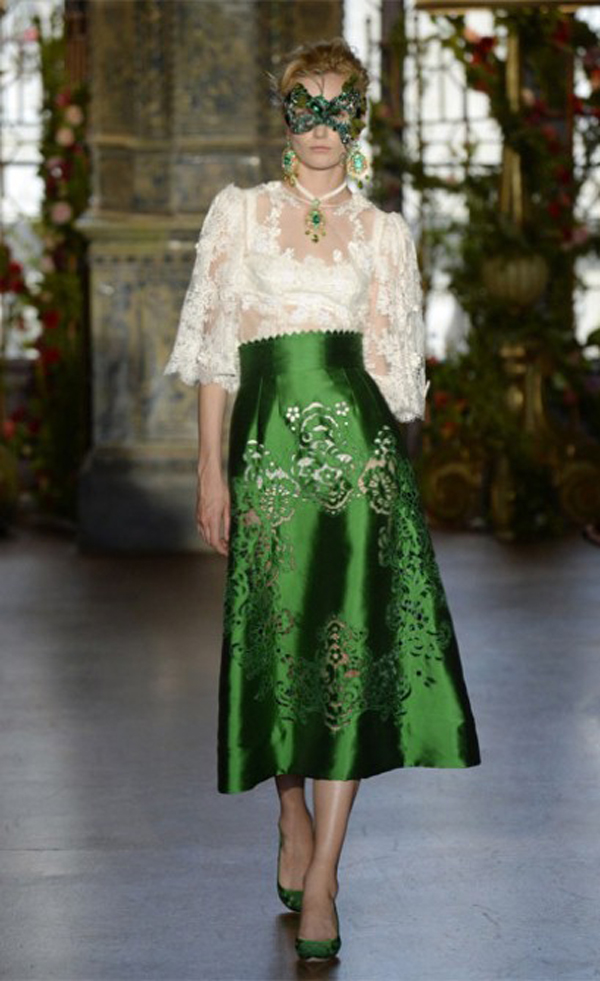 Dolce&Gabbana‘s latest couture show was a worthy match for its lavishly ornate surroundings in Venice.

Logically, couture shouldn’t be an easy sell in the current climate. “Dresses that cost the same as two Bentleys,” as one client put it during couture week in Paris. She didn’t seem terminally deterred. Still, one can see the problem. There’s also the question of where to wear these clothes, what with fewer balls, even among the Houston/Dallas/Dubai set.It was therefore mighty shrewd of Domenico Dolce and Stefano Gabbana to stage their third couture (or as Italians call it alta moda ) show in a couple of adjoining 15th-century Venetian palazzi overlooking the Grand Canal in front of a hand-picked audience of clients and their husbands. Those dizzyingly ornate interiors not only do justice to these clothes, they remind the super-rich that they have a responsibility to dress the part. It was clever, too, because the Biennale was a short vaporetto ride away. Designers know better than to draw comparisons between what they put on the catwalk and art. But the juxtaposition of couture and Venice’s cultural festival raises interesting questions about the intrinsic worth of objects. If it’s fine for a conceptual artist at the height of their career to dash off work that sells for millions, and accepted that a songwriter might be able to retire after one hit composed in half an hour, then really, where’s the problem in a 700-piece dress that took three months to construct and is the product of 40 years’ combined expertise, costing the same as a central London flat?Dolce&Gabbana’s latest couture show was a worthy match for its lavishly ornate surroundings in Venice. 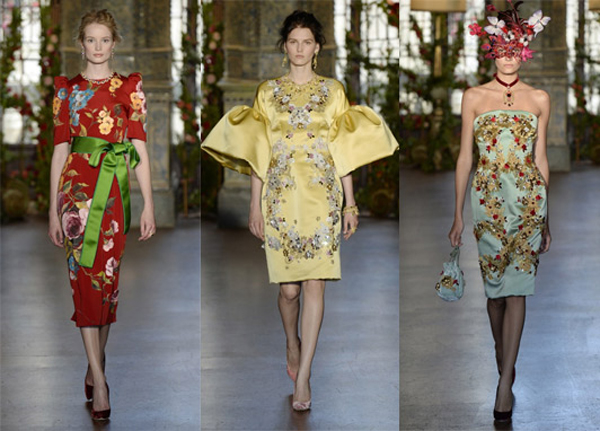 Leaving aside for a moment the workmanship (or workwomanship: Dolce&Gabbana’s alta moda atelier, although only a year old, employs 80 seamstresses), the clothes in this collection are heart-stoppingly beautiful, even in rooms as gilded and laden with frescoes as the Palazzo Barbaro’s. Womanly, without ever veering into parody, they’re also classic yet utterly contemporary in their construction and sensuality. Even committed androgynous minimalists would find themselves seduced by the curve-enhancers here. While there’s a new silhouette to complement their beloved pencil and prom skirts – the short dress fitted narrowly over the torso and flares into a wide skirt – Dolce & Gabbana generally don’t stray far from the 1950s inspired codes of their house. Presumably that’s why they’ve reached such a stage of perfection. And this was pretty near perfect. Dolce & Gabbana may have been busy lately, what with one thing and another. But it doesn’t seem to have affected their work. This was more than the match of anything I saw at Paris’s couture shows – quite a feat considering they’ve only been making couture for three seasons. Lace, a house speciality, was cut into diamond shapes and sewn back together to make corseted, frothy skirted Harlequin dresses. Silks were hand-painted or screen-printed with Canaletto prints and layered over crisp tulle petticoats.

Cloaks (couture’s favourite new cover up) were sculpted from Venetian velvet woven with real gold thread or festooned with thousands of individually hand-sewn pearls. Ankle-length tulle or silk dresses were embellished with gold flowers. The gold was real, as were the diamonds and sapphires used for the stripes on the T-shirts of the gondoliers decorating a pair of earrings. Who knew this duo were such accomplished designers of fine jewellery? For all the lavish materials and traditional skills, these clothes never erred from their fundamental functions: to look good and seduce. Two of the standouts were a fitted, deceptively simple-looking grey cashmere skirt-suit and a plain black fitted wool dress with a sweetheart neckline. The dress sold, along with four other outfits, in the first 10 minutes after the show. When I peeked backstage, clients were queuing, either to place their order then and there or make an appointment for the following morning. These are one-offs. So buy now to avoid disappointment and don’t worry about where to wear them. They’ll look fabulous displayed alongside your art.

Read more on Swide – A tale of the Dolce&Gabbana masquerade